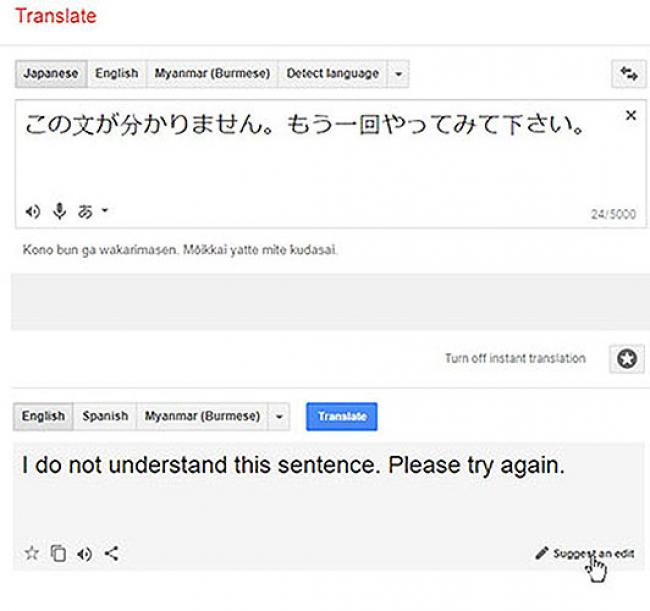 Posted in CAT's Meow: Technology and Translation; Posted on Mar 1

A few weeks back, we announced the start of a new series for the Tone blog, the CAT’s Meow. For those unfamiliar with CAT, it is the common abbreviation for Computer Assisted Translation. In this series, we hope to shed light on the role CAT tools and machine translation play in the translation industry. You might not know it, but you are already familiar with this concept. Google Translate is perhaps the most well known example of machine translation.

Too Good to be True

The other day a colleague was happily talking to me about how a state agency had their website available in multiple languages, “You can just use a drop down menu and choose the language that you are looking for”. Skeptical, I asked , “Ok, show me, is Burmese available? If it is I bet there are missing characters”

Burmese was available and there were missing characters, likewise, my gut told me that several other languages listed would probably look similar. If you looked at the Spanish language version of the site, it was clearly different. The reason being, a human translator had spent the time actually translating the material, but the other languages were powered by “Google Translate”.

Google Translate is known to be unreliable. Even though it runs on an intricate set of systems with a built in review system, it is still imperfect, as it requires use and input, which most users do not contribute to. The accuracy of a language is largely based on its popularity and simplicity. Depending on the situation, Google Translate may even ignore parts of the sentence you want translated.

Google Translate offers 104 languages. This is an impressive number, but there are over 7,000 languages in the world. Languages that Tone frequently translates such as Karen and Maay Maay are not even on that list. With that perspective, Translate leaves much to be desired.

The conversation about humans versus machines has been an ongoing theme with the Tone blog, and for good reason. We don’t see machines as competition, we see them as partners. The internet of things isn’t going to take our job, it’s only going to enhance it and allow us to connect with more customers.

A partnership is both ways, and the human side of that partnership is ever more important. On the computer side of this partnership, we are helping computers to become more powerful for our own benefit. Thanks to new technologies such as deep learning, artificial intelligence is increasing in accuracy and usefulness as a tool. If you look at the UN websites you can visibly see the difference between their translated work and what is often “Powered by Google”. Humans, aided and assisted by machines, did it.

Tone is exactly that. Our work isn’t “Powered by Google”, it’s powered by actual people, in over thirty different languages, each with experience in those languages. At the most, we are assisted by machines.

When Google Translate starts offering Certificates of Accuracy on a case by case basis, maybe then we’d be worried. We offer translation of nearly everything because we can.Machines cannot translate nuance in language, emotional feelings, or cultural subtleties.

Going forward, the CAT’s Meow series, or CAT-agory, rather, will: